The Noisy Cricket by BeavisAudioResearch is a 1/2W guitar amplifier based on JRC/LM386 chip. It is an evolution of the Ruby Amp by Runoffgroove, keeping the circuit core idea and introducing new features like a tone control and an overdrive boost switch. 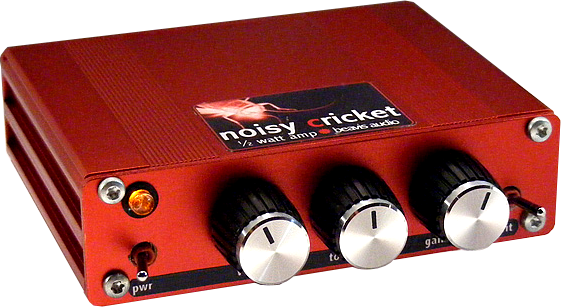 The Noisy Cricket circuit keeps the basic configuration of the previous Ruby Amp:

The improvements by BeavisAudioResearch are the boost switch also called "Grit mod" (SW) and a new tone circuit (VR3, C5).

The 1K logarithmic potentiometer (VR2) is placed between pins 1 and 8 to adjust the voltage gain from 41 (28dB) to 200 (46db), similar to the Ruby Amp. The Gain is calculated following the general LM386 formula:

The new Tone control placed between the Volume pot and the LM386 is the main contribution to the original Ruby Schematic.

It is a new idea because in the past all LM386 based circuits tone mods ( like Bassman or Hiwatt ) tried to shape the frequency response using a high-pass filter: emphasizing the treble and removing the bass.
Noisy Cricket Tone control introduces a passive low-pass filter that will wipe out treble harmonics and preserve the bass.

As you can see in the above graph, the goal of the tone control is to provide compensatory sonic adjustment, rather than a tonal overhaul. The advantage of this one knob tone circuit is its simplicity but there are also some cons:

The Grit Mod is the switch from pins 5 to 7 in the LM386. It drives the circuit a little harder, giving it a little extra edge/breakup.
The pin 7 in LM386 sets the DC idle output voltage to half the power supply. This voltage reference point must be as stable as possible, that is the reason why the cap C3 is placed from pin 7 to ground: to remove the hum/noise from the Power supply line.

With the switch on, there is a feedback loop between the output (pin 5) and the DC voltage reference (pin 7), this point will be affected by the audible output signal, sagging the DC point and there will be some buzz on the voltage reference. Any distortion or trembling feedbacked signal in pin 7 will be added to the input signal an amplified giving a subtle distortion or extra break. If you want to learn more about this part, check the LM386 Internal Circuit Analysis.

Following the LM386 application notes, some measures should be taken to increase the stability and prevent signal degradation:

The frequency response is tailored by the Bass Cut filter formed by the output cap C8 and the load (speaker) and the filters of the Volume/Tone circuit previously seen:

The Tone/Volume circuit together with the bass-cut filter (C8) create a subtle mid-hump which means that the circuit accentuates frequencies between the bass and treble ranges (mid-frequencies). A lot of well know overdrive pedals also use this mid-hump equalization around 1KHz to keep the guitar sound from getting lost in the overall mix of the band (TubeScreamer mid-hump is around 720Hz).

This frequency response is also very interesting if you are intended to drive a small speaker because they have a better behaviour when reproducing a small range of frequencies. The low amount of bass keeps the speaker away from farting out and the smooth treble makes the tone less shrill.

Output Headphone Plug: The solution is similar to the RunoffGroove Ruby Headphone Mod, to place an auxiliary output headphone plug wired as in the image:

The resistor R is used to attenuate the output level, otherwise, it will be too loud. The reference value for this resistor is 10Ω but it can be adjusted to meet the user taste and headphones sensibility. This resistor is placed from the sleeve of the connector to ground. It is important to use isolating washers for this jack or use a plastic jack to avoid shortcutting the R between two grounds.

Should be mentioned that using a different load (headphones instead of the of 8ohm speaker), the cut-off frequency of the bass cut filter formed by C8 and the load will be slightly shifted down, depending on the headphones impedance + resistor (R) combination. However, this change is about some inappreciable tens of hertz.