The Big Muff Pi is a distortion/sustain guitar pedal designed by Bob Myer and Mike Matthews in 1969 and mass produced in 1970. This effect was the first overwhelming success of Electro-Harmonix due to the distinctive sound, price, and reliability. Several versions and reeditions were released over the years.

Many inspiring guitarists use this stompbox, giving to the Big Muff Pi a leading role in the hard-driving music signature:
Tony Peluso of The Carpenters, Carlos Santana, David Gilmour of Pink Floyd, Ronnie Montrose, Mike Mills and Pete Buck of R.E.M., Robin Finck of Nine Inch Nails, Brian Molko of Placebo, Cliff Burton of Metallica, Kurt Kobain of Nirvana, Thom Yorke of Radiohead, Pete Townshend of The Who, Thurston and Lee Renaldo Moore of Sonic Youth, Billy Corgan of Smashing Pumkins, J. Mascis of Dinosaur Jr., Dan Auerbach of Black Keys, Ace Frehley of Kiss, The Edge of U2, Jamie Cook of the Arctic Monkeys, Jack White of White Stripes, John Frusciante of The Red Hot Chili Peppers, Chris Wolstenholme of Muse are some of the B.M.P well known users.

The circuit design was inspired by previous Fuzz pedals like the Dallas Arbiter Fuzz-Face, Maestro Fuzz-Tone or Electro-Harmonix Axis Fuzz. In addition, the BMP introduced a double clipping stage, a new tone control and it is able to produce a characteristic sustained distortion sound never heard before.

There are also several enhancements on the design in order to make the circuit stable and reliable: All components are based in silicon, all transistor stages include an emitter resistance, which makes the gain independent from temperature or transistor intrinsic characteristics. Three out of four stages include feedback resistors and Miller capacitors, which stabilize the behavior and frequency response. It is a big advantage versus the contemporary dodgy pedals based on germanium.

The components selected for the design are very generic and easy to find: just high gain NPN transistors, simple silicon diodes and standard resistors, caps and three 100K linear pots. Avoiding exotic parts and making the circuit ready for mass production and a shortage of suppliers.

This study is focused on the American Version 3, associated with the iconic bold red and black design and released in 1976-1977, the analysis can be easily extrapolated to any other version.

The components are labeled following the original Electro-Harmonix printed circuit board:

This clean boost stage is based on a Common Emitter amplifier with Shunt Feedback and some arrangements to enhance the performance. 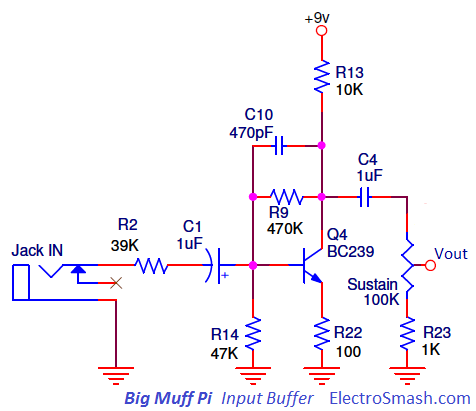 The Input Booster sets the pedal input impedance, shapes the frequency response and adds some gain.

In common emitter amps, the approximate voltage gain is collector resistance divided by the emitter resistance (RC/RE), but the effect of the feedback resistor has to be taken into consideration:
The resistor R9 from collector to base also called Shunt Feedback resistor or RF is a method to apply negative feedback to the amplifier. While it results in a reduced overall voltage gain and input impedance, a number of improvements are obtained:

How it works?: If the emitter current were to increase, the voltage drop across Rc increases, decreasing Vc, reducing Ib feedback to the base. This, in turn, decreases the emitter current, correcting the original increase. The value of R9 should be selected so that the collector voltage is half of the supply voltage.

A simplified analysis method must be used to calculate the voltage gain of the amplifier, otherwise, it turns into an arithmetic nightmare. It consists of 3 steps:

The equivalent circuit uses Norton's current source since the feedback signal is current. In the image below, the feedback resistor is grounded in the input and output sections and the resistors grouped: 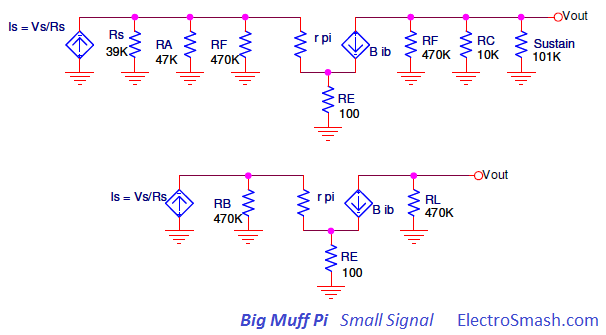 The input resistance of the Input Booster due to the emitter resistance and the feedback network effect is much smaller than R2. So, the value of the input resistor R2=39K accounts for almost all of the signal loading at the input. The 39K it is indeed a low input impedance, and the guitar signal might suffer tone sucking (loss of high frequencies), although tone and volume loss is compensated by the rest of the circuit design.

Increasing the 39k R2 input resistor, the input impedance is increased but it also forms a voltage divider at the input, reducing the available voltage gain.

The Emitter Resistance: Adding an emitter resistance R22 to a common emitter amp, also known as Emitter Degeneration, makes the voltage gain less dependant from BJT parameters, and therefore less vulnerable to temperature and bias current changes. The stability characteristics of the circuit are thus improved at the expense of a reduction in gain.

With a C10 of 470pF and depending on the internal BJT capacitance, low pass filter cut-off frequency is around 1.2KHz. This operation occurs just before the distortion stage; clipping a low-passed signal usually sounds better, smoother and less harsh.

The usual values for this cap are decs to some hundreds of pF, lowering the C10 value will result in a more treble response, rolling-off fewer highs.

The clipping Stage is made of a passive voltage divider (sustain potentiometer) and two consecutive common emitter stages. Each of the two consecutive Q2/Q3 clipping stages keeps the same topology as the Input Booster. In addition, the clipping amplifiers include a back to back diodes to create the symmetric clipping.

The 100K sustain potentiometer controls the level of the signal going into the clipping blocks. If the level is high, the signal will be more clipped and the distortion effect will hold even if the guitar input signal is not strong. The resistor R23 prevents the signal from coming from the Input Booster from being cut-off when the sustain pot is at the lowest setting.

The voltage gain can be calculated applying the simplified analysis method as in the Input Booster:

Note: In the calculation, the diodes feedback network is not taken into consideration because it contains big capacitors C6 and C7 which disconnect the path for DC conditions.

The Gain of the second clipping stage is slightly higher (1 or 2 dBs) than the first one. However, the voltage gain of this stage will not reach such values as 28 or 29dBs. As it will be seen in the next point, the gain is limited by the clipping diodes action. The output signal of the amplifiers will never exceed ±0.6V and all the extra gain will modify the slew rate and the shape of the clipped signal.

The big 1uF series capacitors C6 and C7 located next to the feedback diodes, allow the AC signal to pass through it and be clipped and block the DC bias voltage. Keeping the transistor operating point undisturbed. These caps determine the frequency band the unit clips. Enlarging this cap will make it clip more bass harmonics, make it smaller for more high-end clipping and archiving more saturated tone, more sustain, and compression

The BMP distortion is very narrow bandwidth limited, attenuating harmonics at 40dB/dec outside the pass-band, and taking into consideration the Input Booster similar response which adds another two poles, all frequencies below 90Hz, and over 1.2KHz are attenuated 60dB/dec.

The basic idea inside the Big Muff Pi is to remove the high harmonics using Miller Capacitors three times: in Q4, Q3 and Q2 around 1.2 KHzand resulting in a narrow frequency limited response that accentuates the lows and low mids, making it perfect for bass-less bands. It seems that getting rid of its overdriven high end is the trick to increase the sustain of the guitar.

The Passive Tone Control has a simple and effective design: essentially it is just a combination of high-low pass filters that are mixed together by a single linear 100K Tone potentiometer. The cut-off points are designed so that their interweaving effect introduces a middle-frequency scoop/notch at 1KHz when the potentiometer is set to the middle position. 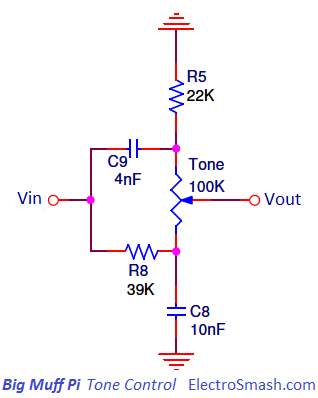 Find below the BMP frequency response, showing from blue to red all values of the tone potentiometer:

The Output Stage is once again a common emitter amplifier amp which recovers the volume loss during the passive tone stack. 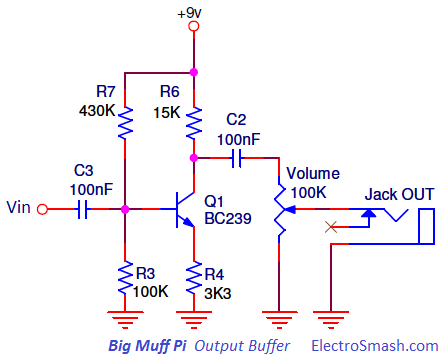 The design of this last stage is simpler than the previous ones, not including resistor Shunt Feedback or Miller compensation. The frequency response is then flat across the audio band and the gain is about 13dB, compensating the loss in the passive tone filter.

The Output impedance of the common emitter transistor stage is equal to RC = R6 = 10K.

The last part of the circuit is a simple 100k volume potentiometer that regulates the output level.

The pedal output impedance also depends on the volume potentiometer position, being always less than 10K:

In the image below, the most important DC bias points are shown. It can be useful to trace circuit failures:

In the graph below the most important signals at the output of each stage are shown:

Our sincere appreciation to B. Toskin for helping us with the article.