The Back Talk Reverse Delay pedal is included in the Miscellaneous Series Effects released in 2001 by Danelectro. Built in a sturdy die-cast enclosure and running on 9V, it is a cost-effective pure digital backward delay, suitable for creative possibilities, going from subtle delay to psychedelic oscillating noisy sounds.

The concept behind reverse delay device is simple: The input signal is passed through a memory buffer, where it is delayed for a short time and then sent reversed to the output.

Mixing the reverse delayed sound with the original signal, the pedal produces a single repeat following the original sound, but feedbacking a percentage of the delayed signal back to the input produces a repeating echo effect, where each subsequent echo is a little quieter than the previous one.
If the feedback gain is more than unity, the echoes will build up in level rather than decaying, resulting in an uncontrollable psychedelic howl.

To illustrate the operation, a sawtooth signal is used as a guitar input signal. 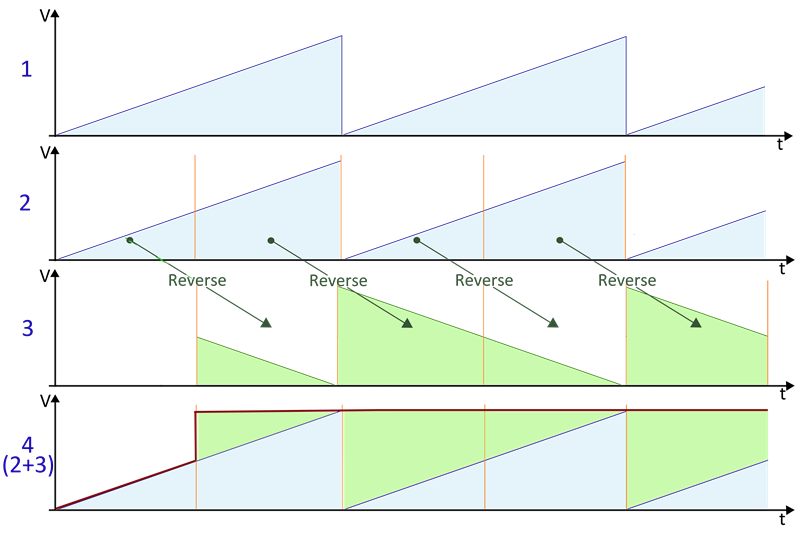 The pedal is commanded by 3 knobs: Mix, Speed, and Repetitions which will adjust the effect sound features: 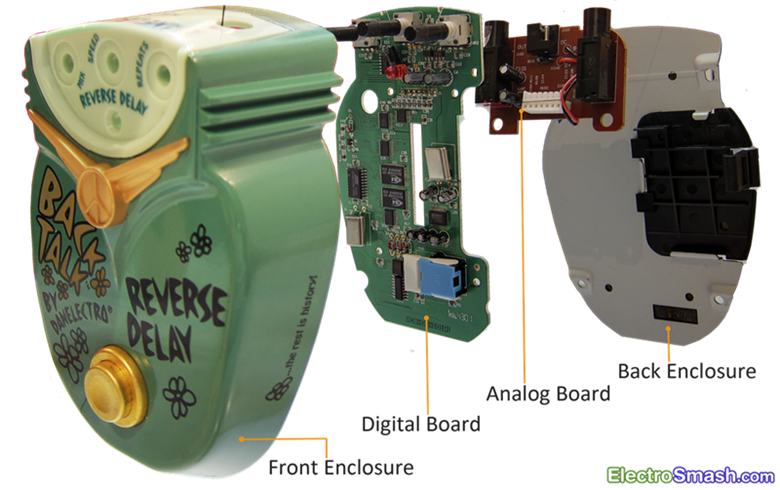 The small input/output buffer board is a single layer PCB which contains 3 stages: the Voltage Bias, the Input Buffer, and the Output Buffer. 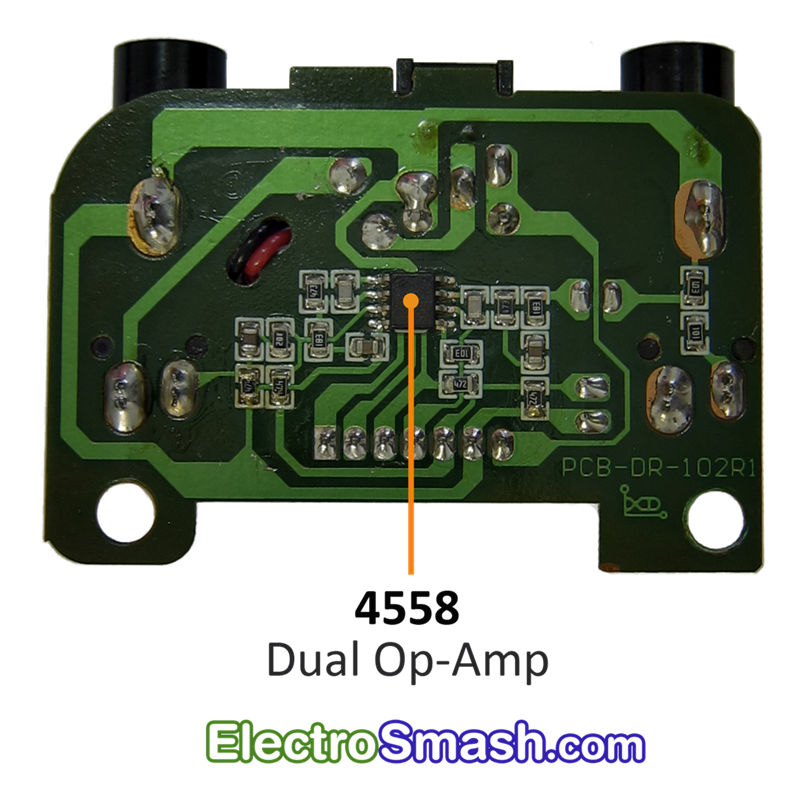 The circuit is based on the famous 4558 dual op-amp IC, one half of it will be used as Input Buffer and the other half as an Output Buffer. The 7-pin connector will send and receive signals between this PCB and the Digital Board.

The Voltage Bias Block provides the voltage levels to the 4558 dual op-amp and electrical protection against reverse polarity supply. 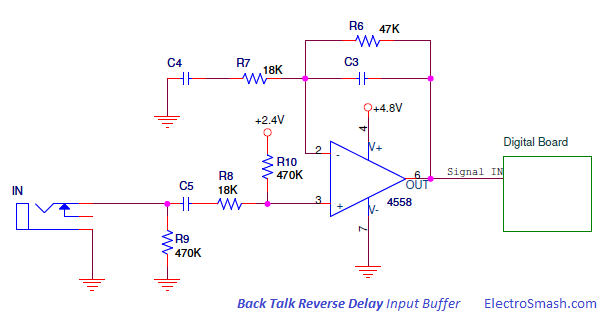 Not considering for the moment the caps C3 and C4, the non-inverting amplifier gain can be calculated as:

This pass-band filter is similar to the non-inverting amp in the Tube Screamer. It will add a subte honky tone but besides this small tone modification, it is important for digital effects to eliminate the excess of bass and treble due to the bandwidth limitation in the analog to digital conversion stage.

The Output Buffer procures low output impedance, filtering and some voltage Gain, keeping signal integrity and preparing it to the output. 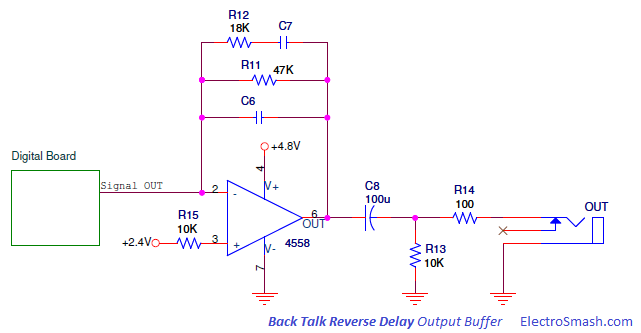 The op amp is in inverting configuration, C6 will smooth high harsh harmonics and C8 is a bass cut filter, muting the excess of bass to be delivered to the next stage. 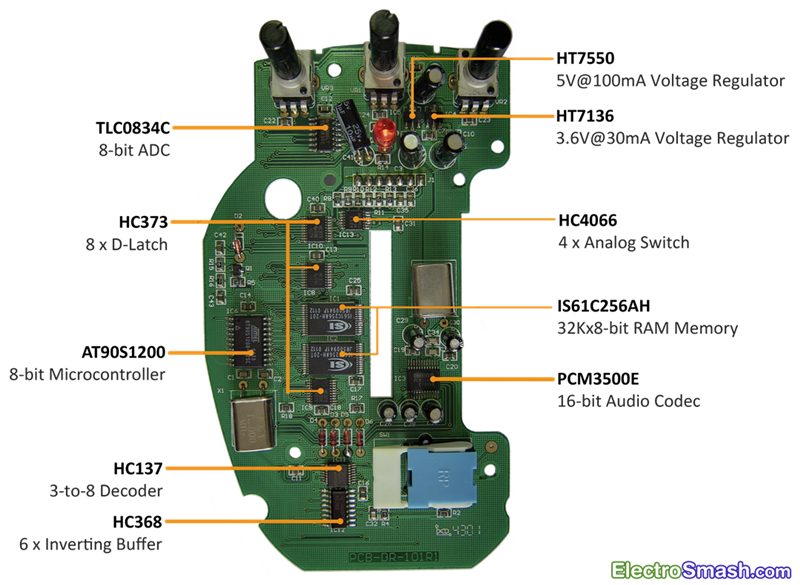 The circuit is based in the 8-bit Atmel microcontroller AT1200S which manages few peripherals. The input signal coming from the Analog Board is primarily digitalized by the PCM3500E Audio Codec and the resulting data is processed by the Micro using the RAM memory to generate the reverse delay effect. Finally, the digital signal is translated back to analog levels using again the PCM3500E Codec. Two linear voltage regulators will grant 5.0 and 3.6 of voltage supply for the parts.

The Power Supply Stage is made up of two Holtek voltage regulators, they will provide voltage supply to all stages in the pedal.

It is important to keep under control the system at start-up estate. Otherwise, the microcontroller may initially operate in an unpredictable fashion.

The Power-On-Reset circuit asserts a reset signal whenever Vcc supply falls below a reset threshold. The reset time-out period can be adjusted using C42. Reset remains asserted for an interval programmed by C42, after Vcc has risen obove the threshold voltage.

The VR3 Mix, VR1 Speed, VR2 Repetitions 3K3 potentiometers and the pedal footswitch SW1 are read by the microcontroler through an Analog to Digital Converter IC7 TLC0834C.

The microcontroler does not have enough embedded ADCs to read all the analog levels from the potentiometers and the footswitch, so as to do it and save the maximum resources, the Texas Instruments TLC0834C ADC is used. The result of these measures are sent in a single serial line to the microcontroller to be processed.

The Audio Codec is a single chip that encodes the guitar analog input as a digital serial signal to be taken by the microcontroller. It also decodes the processed digital signals from the microcontroller back into analog. So, the Codec contains both an Analog-to-digital converter (ADC) and Digital-to-analog converter (DAC) running off the same clock at 11.286 MHz.

All delay based pedals need some mechanism to store the audio in order to play it later as a delayed version. This method can be magnetic tape in old pure analog effects, capacitors in bucket brigade delay devices or just RAM memory in pure digital pedals.

In the Back Talk pedal, the main bottleneck in the hardware design is the way to manage two 28 pined memory chips with a limited free lines. To do so, 16 d-type latches are needed to extend the number of available lines multiplexing the port B of the micro. 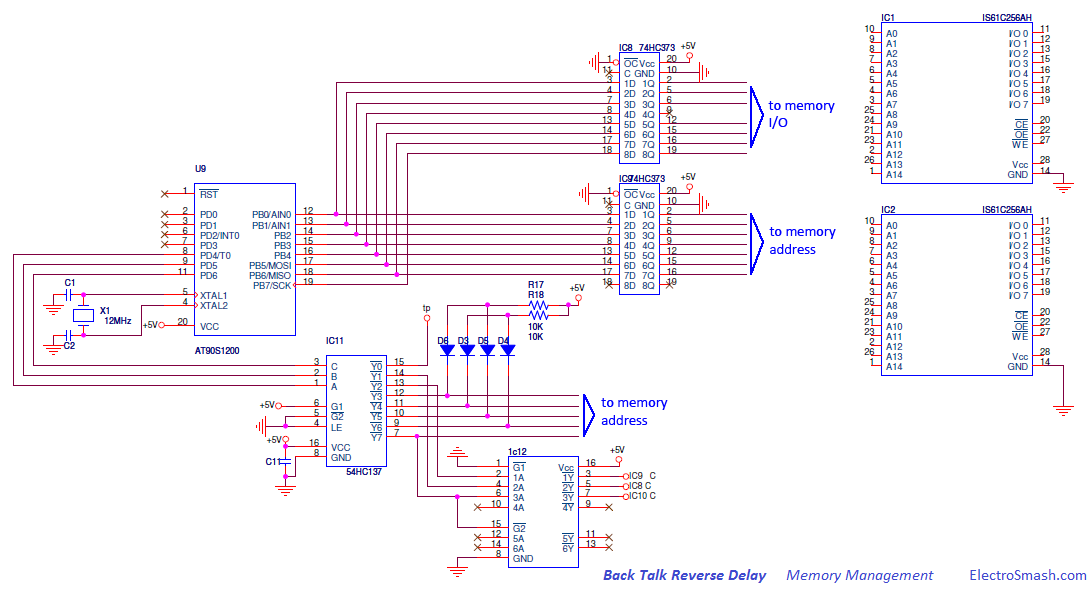 The Microcontroler receives the digitalized guitar signal from the PCM3500 Audio Codec in serial mode. Then, the data serial string is processed and sent in parallel to the RAM memory through the HC373 D-latches; the IC9 D-Latch is used to drive the address lines and the IC8 manage the memory I/O lines.

Depending on the user potentiometers (mix, speed, repetitions) the micro will apply different adjustments in the feedback, deep of memory buffer and mixing algorithm.

After understanding the circuit and Danelectro approach for this pedal, it can be concluded that the reverse engineering clone is pretty discouraging. Despite the relatively complex PCB layout and all surface montage devices, some of then obsoletes, the git of the pedal remains in the source code of the microcontroller which is not available.

The hardware design indicates that the program code must be complex as well; the serial data encryption and decryption for the Audio Codec and the ADC, the 24 latches, 2 memories and decoder management for real time signal processing is not trivial.

Anyway, is a good learning exercise to see how the big ones design DSP pedals, so you can for sure gain some ideas for you own designs, good luck!