The MXR 102 Dyna Comp is a compressor effect guitar pedal, released in 1972 by MXR and rapidly becoming popular because of its price and ease of use. The electronic circuit was also used as a reference design on many other compressor effects like the Ross Compressor, T-Rex CompNova, Ibanez/Maxon CP5/CP9/CP10 and boutique pedals. This model is neither the most silent nor the most hi-definition piece of gear but it has real character and it's easy to find. 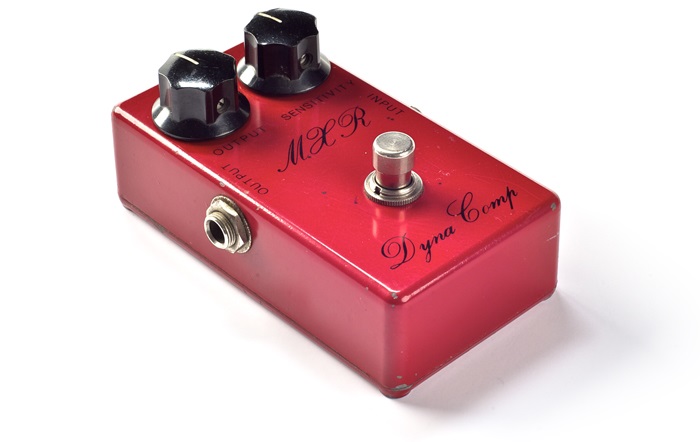 This pedal produces dynamic range compression, this is basically smooth out volume differences between notes; giving more body and level to weak notes so the sound does not change drastically no matter what the real signal level is, giving better articulation and sustain to the guitar. The pedal also adds its own coloring and tone to the signal.

To make the circuit easier to understand, it is divided into 5 blocks: Input Buffer, OTA Amplifier, Envelope Detector, Output Stage and Power Supply: 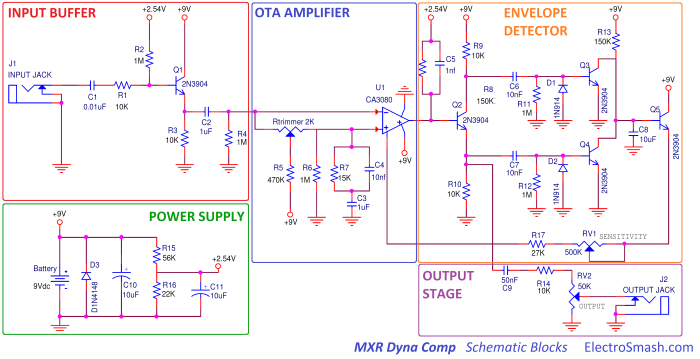 The main design idea is this: The Input and Output Buffers isolate the circuit, keeping good signal integrity. The core of the circuit is the OTA amplifier, this part will give higher or lower amplification to the signal. In order to decide the amount of amplification, the Envelope Detector will measure how big or small the guitar signal is at a time and gives to the OTA a current feedback proportional to the guitar level, amplifying weak signals.The simple Power Supply provides energy and bias points to all the circuit parts.

note: The circuit is redrawn trying to make it simpler. Usually, the Envelope Detector stage is represented in parallel looking like a Long Tailed Pair or a Differential Amplifier that could be misleading.

The parts in the design are not critical, you can use substitutes for the transistors (2N3904) or the silicon diodes (1N914). The only part which is not so easy to find nowadays is the CA3080 IC.

The original MXR Script model which is not available nowadays uses the classic MXR white/yellow PCB with a distinctive shape. It was a one layer PCB with all the components on one side. When Dunlop acquired MXR in 1987, the PCB was progressively redesigned using modern materials/components and a double-sided PCB with red solder mask. 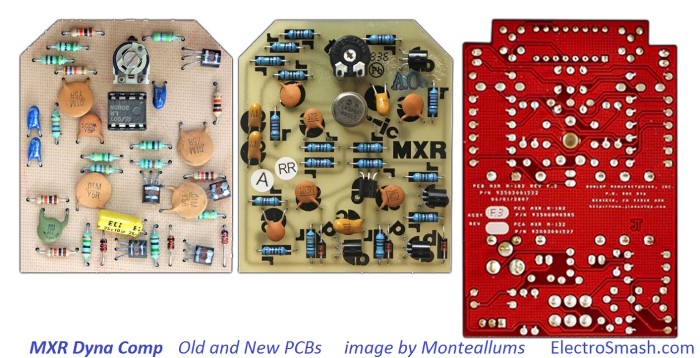 The Power Supply block provides +9V supply to the circuit components and also an unusual bias of +2.5V with resistor divider (R15 and R16) to be used as a virtual ground to the CA3080 and also as a bias voltage for the transistor stages: 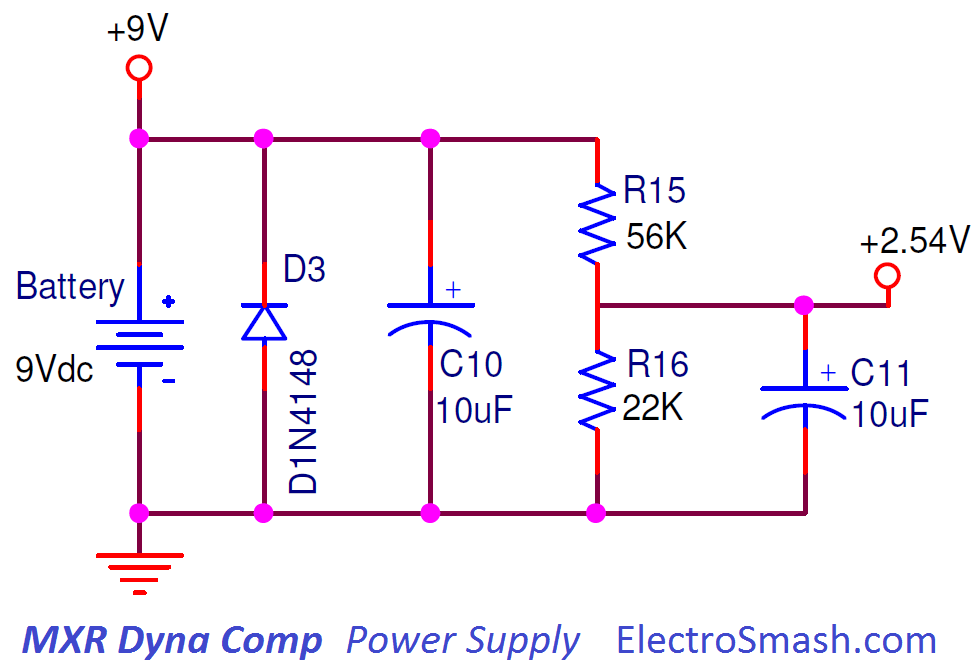 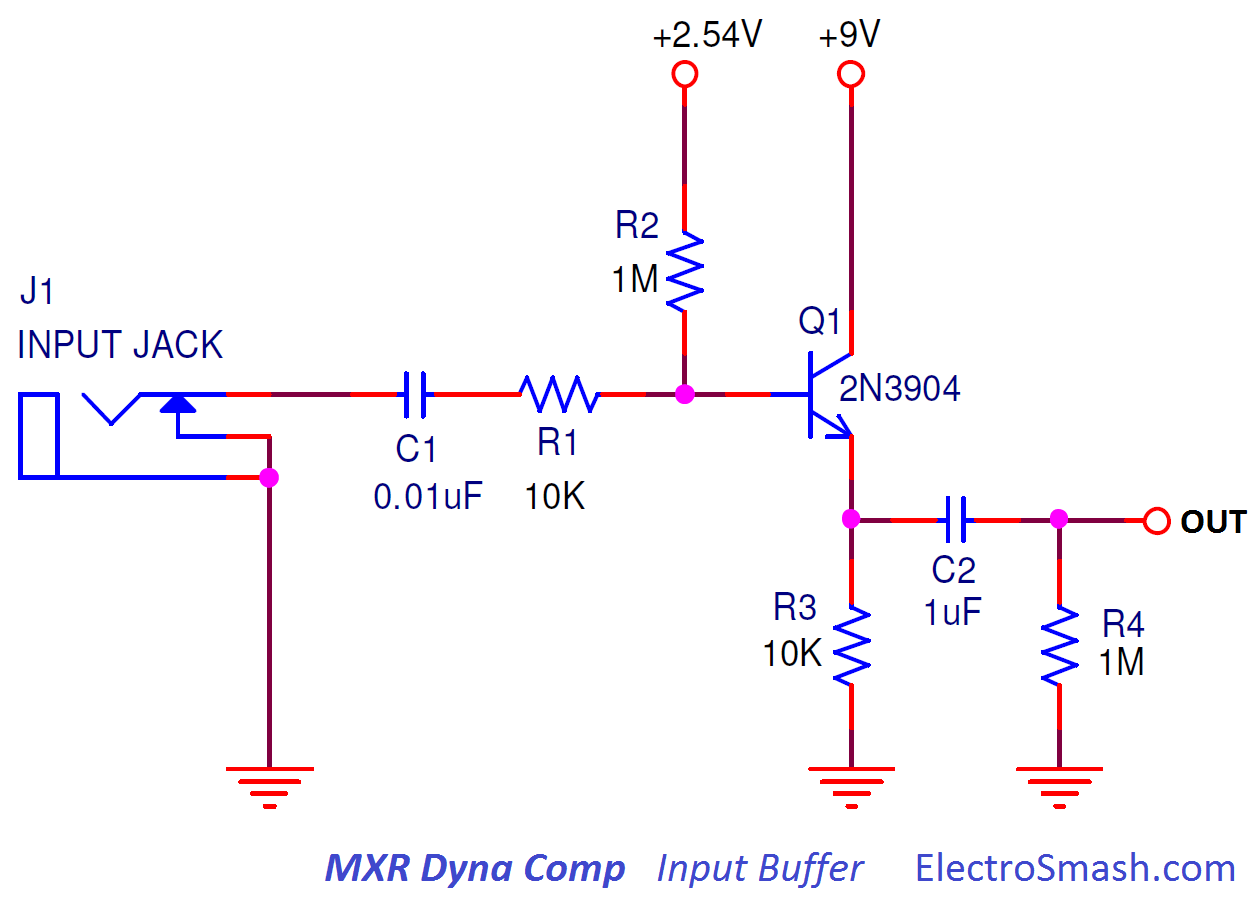 In order to calculate the input impedance of the Emitter Follower, the hybrid-pi model can be used to analyze the small signal behavior. If you want to get all the details, please check the Tube Screamer Input Impedance Calculation, it is basically the same circuit with some changes in the components values, otherwise just stick to the general formula:

Therefore, the MXR Dyna Comp input resistance is 1MΩ (almost the value of the biasing resistor R2) which accounts for almost the entire signal loading at the input and can be considered a good/high input impedance.

The plot of the Input Stage freq response shows a unity gain and a filtering of the excess of bass (dc-level), preserving a good flat response between 20Hz and 20KHz.

The low frequencies area is dominated by the high-pass filters that place two poles on 3.1Hz and 0.15Hz creating a roll-off for the low harmonics. This filters will just remove DC-offset at the input and between stages, the audio band (20Hz to 20KHz) is not touched.

The OTA Amplifier is the heart of this effect.
To understand its functionality, it is important to understand the concept of how an audio compressor works:

The aim of the OTA is to apply a variable gain to the original guitar signal, giving more amplification to weak signals and less to the hi-level waveforms. This amount of gain is set by the current bias pin 5 of the CA3080 and generated in the next stage (Envelope Detector) 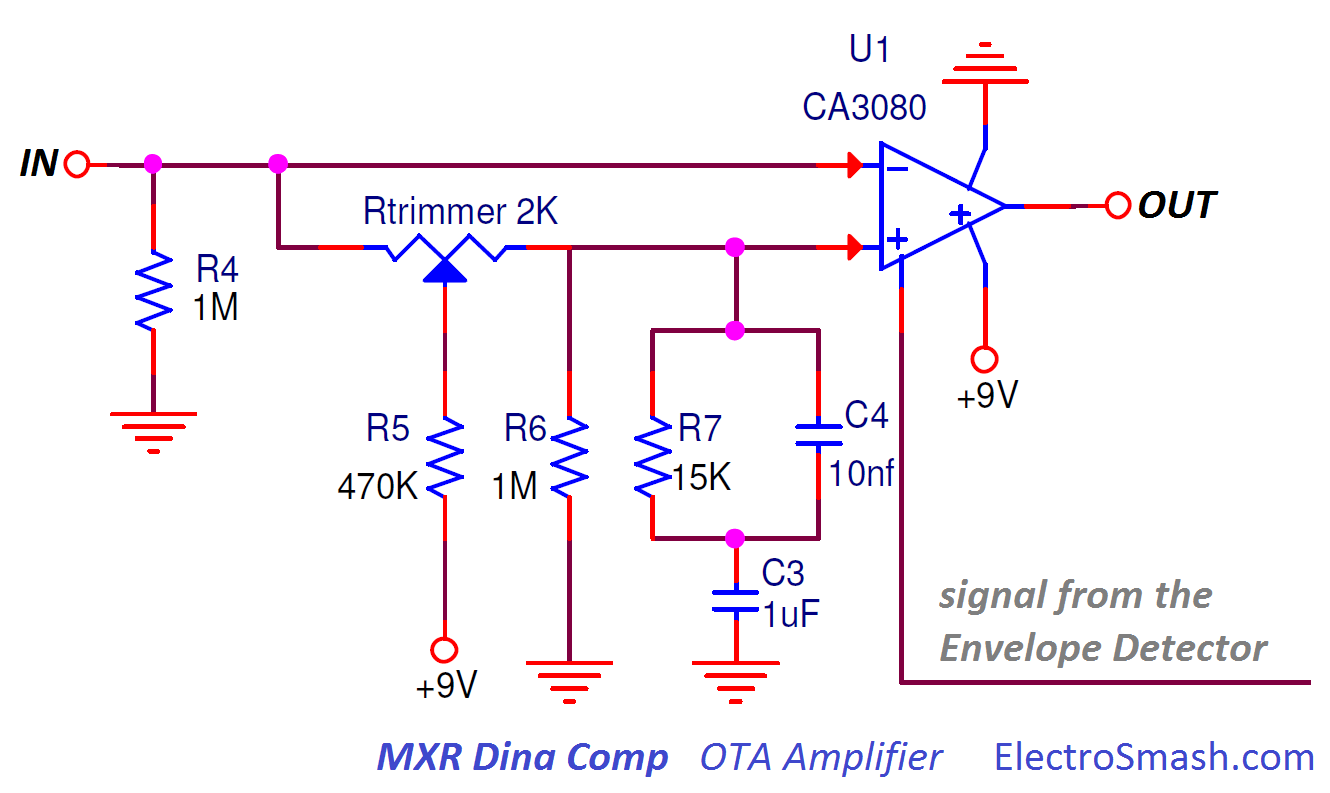 With the simplified middle circuit, the bias at the input of the CA3080 (Vx) can be calculated as:

note: The Rtrimmer is ignored because its value is much smaller than R4, R5, R6 or Zin.

Usually, the bias point sits around 3~4V (depending on the CA3080 current bias pin)

There is a filter in the non-inverting input: R7(15KΩ), C3(1uF) and C4(10nF) that creates a low pass filter making the frequency response to be different in each input:

The blue line (CA3080 positive input) level is slightly smaller (~1dB) than the negative input, it is due to a small signal bleed through the Rtrimmer and R5/R6. This OTA chip amplifies the voltage difference at its input pins:

In the image below you can see the input voltages VS the output voltage:

The C5 cap (1nF) cap placed at the output of the OTA will smooth out the excess of hash high harmonics, in orange and red the difference can be observed.

This equalization is often attributed to a pre-emphasis / de-emphasis method to reduce noise (the CA3080 is a pretty noisy part) and also will give some signature to the sound of the pedal.

MOD: Some users lower or remove the 0.001uF C5 cap to give the circuit full or emphasized top end response (values between 100pF to 470pF or completely removing it).

4.1 The OTA Chip: CA3080.
The OTA is implemented using the CA3080, this part was the first commercially available OTA by RCA in 1969, manufactured also by Intersil/Harris and discontinued nowadays.
Transconductance is a way to measure the gain of an amplifier relating the input voltage with the output current and usually designated with the letter gm and measured in Siemens. In a nutshell, the CA3080 is basically an amplifier whose differential input voltage produces an output current.

We are not describing in detail how everything works inside the CA3080, there is a fantastic application note by Intersill that describes how it works, and some other works that can give you more details about the internal electronics of the IC.

This block provides the current feedback to the OTA amplifier in order to create the compression effect: 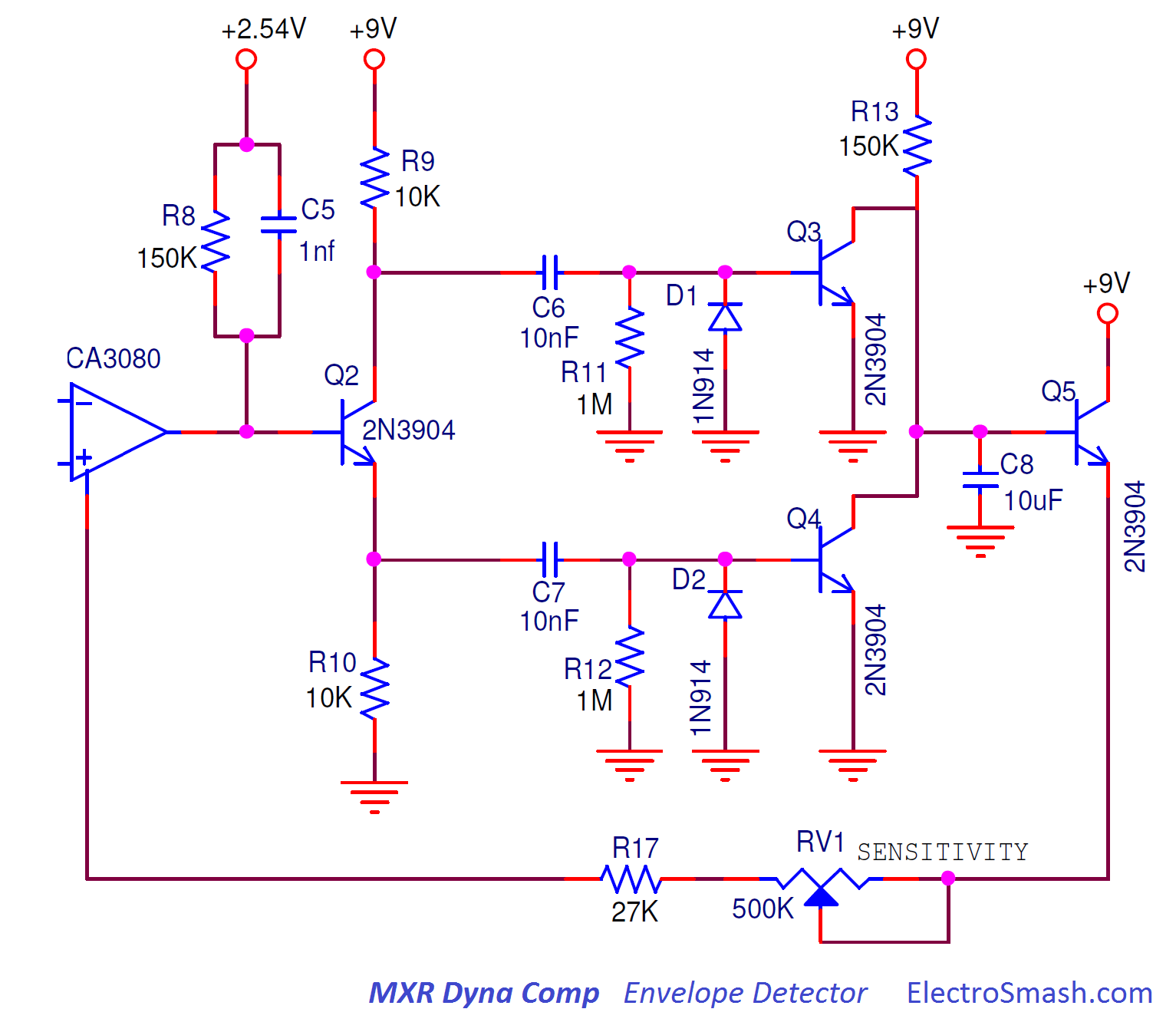 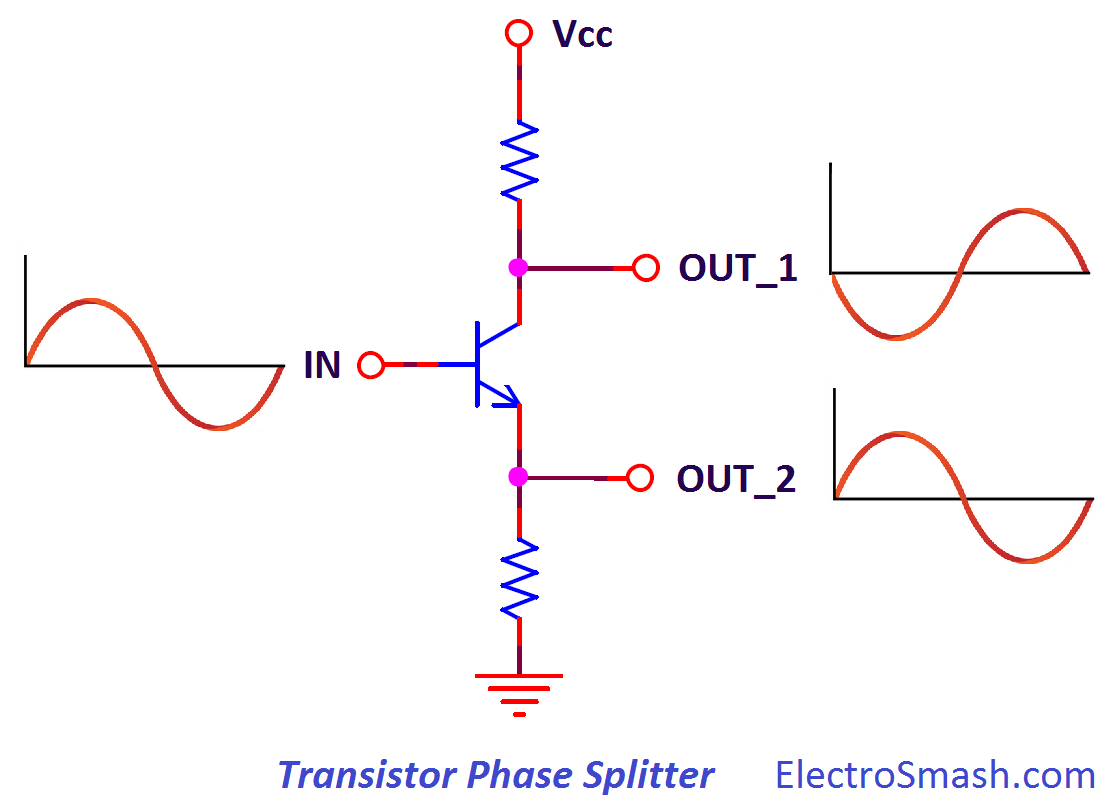 Above image: the averaged signal in blue color (measured at the C8 cap) changes following the amplitude of the guitar signal in purple/green colors (measured after the phase-splitter at R11 and R12):

MOD: Disconnecting C7: If you check the full schematic the output of the pedal is also connected to the emitter of Q2. The D2 diode could clip the output signal making the signal distorted, this is why some people decide to remove the bottom envelope detector (by disconnecting C7) and just use the top one. The side effect is the fact that using half-wave rectification leads to some envelope ripple on lower notes during the decay of held notes

MOD: The attack mod makes the effect more flexible to play different styles of music. It can be done replacing the 150KΩ R13 resistor with a 10k+150k pair in series or using a toggle switch to select different values i.e 150KΩ or 10KΩ.

The output signal is taken from the emitter of the phase splitter Q2 simplifying the circuit and using less parts. 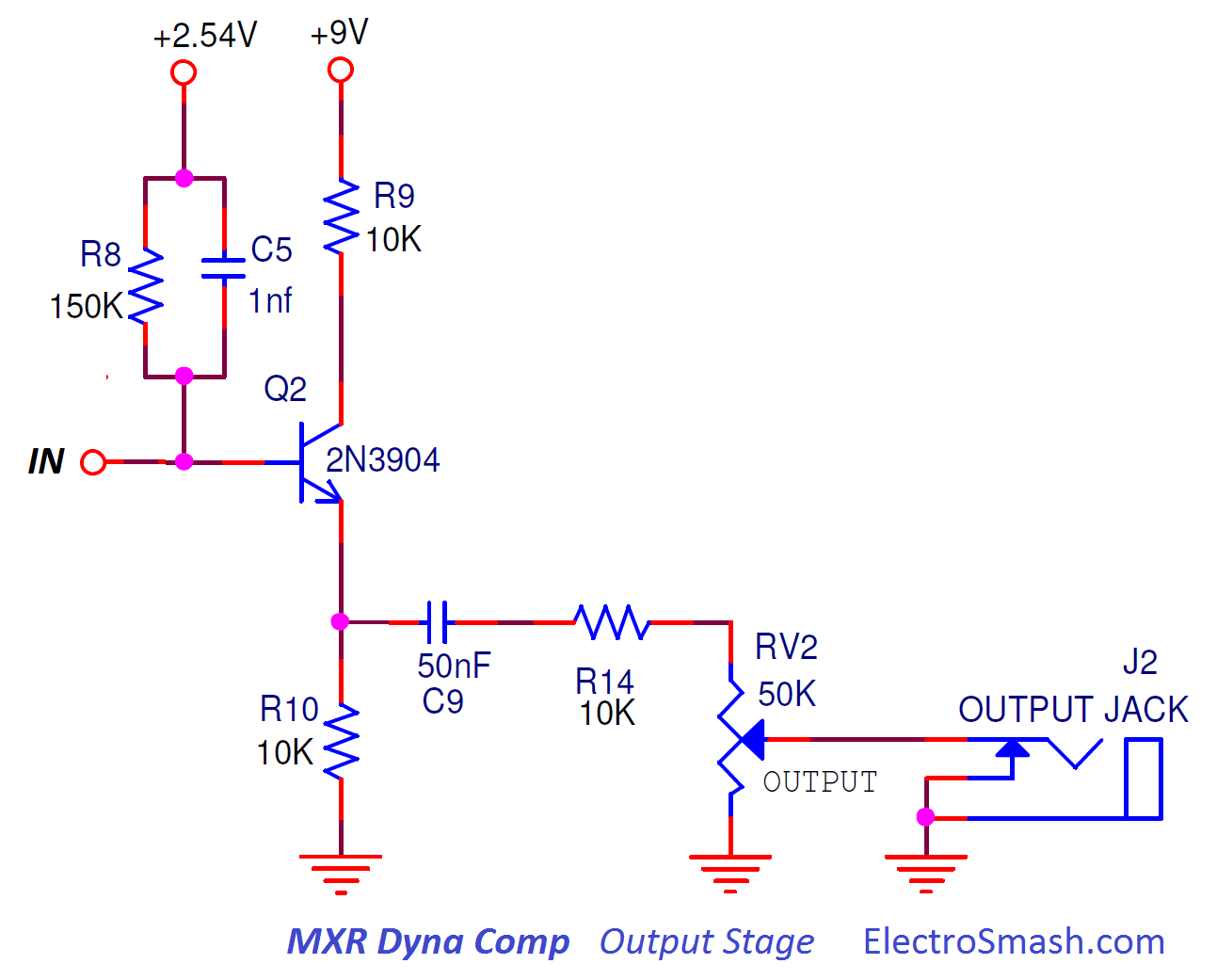 MOD: The output series 0.05uF capacitor C9 can be enlarged to a 1uF to give to the effect a full bottom end response.

Thanks for reading, all feedback is appreciated. My sincere appreciation to Eric (ontheroadeffects), C. Chiuchiolo and Dror S. for your support.