Due to the great success of the pedal, being maybe the most sold guitar pedal of all times, Dunlop produced several versions of the Wah-Wah and signature models adding enclosure customization and small circuit modifications. This study is focused on the first model, the Dunlop Crybaby GCB-95 which is considered to have the classic wah tone.

The Wah-Wah pedal was invented in November 1966 by Lester Kushner and Brad Plunkett working at Warwick Electronics, a division of Whirlpool that owned Thomas Organ Company and Vox. Thomas Organ patented the Wah circuit design but by the time the patent was granted, there were already dozens of copies of the pedal in the market. Enforcing the patent was too expensive so no attempt was made to stop the knockoffs.

The circuit is undoubtedly inspired on the VOX V847. One of the major concerns of the original VOX design was the tone sucking due to the low input impedance of the Input Stage which was 69.5KΩ. Dunlop fixed this problem adding a buffer which raises the input impedance to 1MΩ preserving the guitar original tone. Besides the Input Buffer there are only two changes in the circuit:

The design is built using 3 cascaded transistor stages with a couple of passive components and an inductor; the simple circuit makes the power consumption below 1mA.

The gist of the design remains in how the resonant frequency of an LC filter made up of a fixed inductor L1 and a fixed capacitor C2 can be changed using a variable resistor VR1.

Before 1990 all Dunlop Wah pedals had wires between the jacks and the circuit board. In mid-1990 Dunlop changed the PCB design and started mounting the jacks directly on the PCB. Also, from mid-1991 onwards, a buffer circuit was added before the actual wah circuit (it is there if your PCB says ”Rev F” or higher).

The current revision looks much like the models that have been running since mid-1992. For more detailed info about the different versions of the circuit you can check the StinkFoot website.

The frequency response is characterized by a resonant peak centered in 750 Hz (with the variable resistor VR1 at mid position). The peak sweeps up and down from 450 Hz to 1.6 kHz. The selected frequencies are amplified up to 18dB while the surrounding ones are attenuated:

The circuit of these 2 pedals is pretty similar; the Dunlop design includes the Input Buffer to preserve the signal integrity but the price (Dunlop slightly cheaper), quality construction and sound are really similar. Players often decide between the two of them just on the looks.

Dunlop CryBaby GCB-95 Vs VOX V847 Frequency Response: The crybaby has slightly less bass content. You can check in the graph below how the low freq harmonics are more present in the VOX than in the Dunlop due to the Input Buffer which filters part of this bass content.

The most important DC bias points are shown in the image below. It is useful for circuit failure troubleshooting:

The simple Power Supply Stage provides a stable energy supply to the circuit.

The 9V supply will feed the transistors. The ZL9M3 is a 9.1 zener diode which helps to regulate the power line (protecting the circuit from voltage peaks over 9.1V) and also prevents reverse polarity connections. 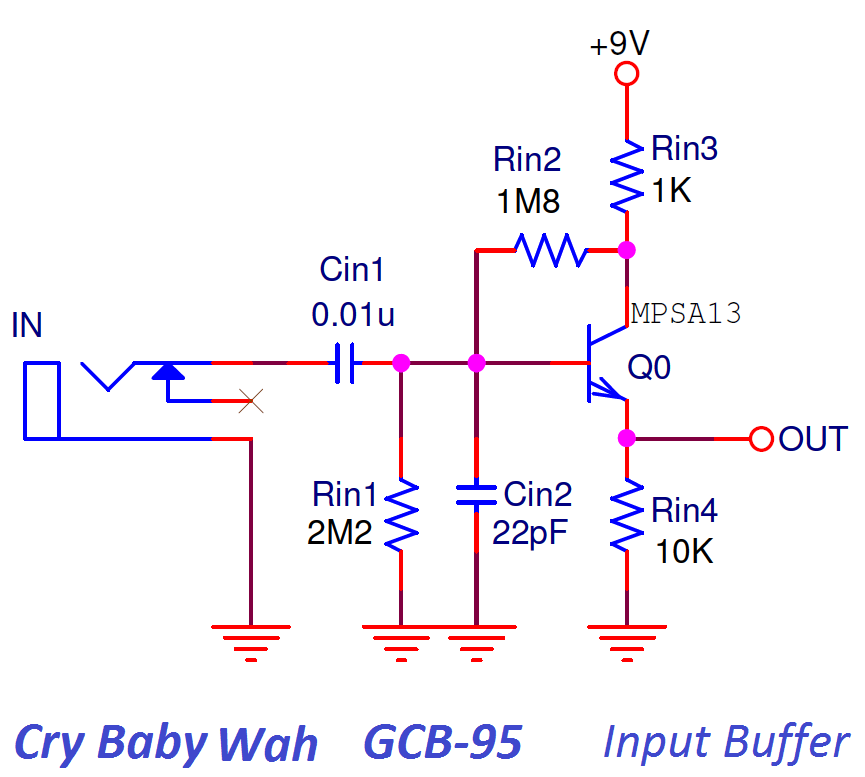 1MΩ can be considered a good input impedance to avoid signal degradation. The effect of the resistor Rin3 reduces this value to 750KΩ which is still a good input resistance value.

note: The hybrid-pi model and mathematics behind the Voltage Gain and Input Impedance calculation are similar as in Tube Screamer input buffer, check it for further details.

The Active Filter stage is a Common-Emitter Amplifier with Voltage Shunt Feedback network:

In Common Emitter amps, the voltage gain is calculated as GV = RC/RE = 22K/390 = 56.4 = 35dB. The effect of the feedback network has to be taken into consideration, reducing in practice the gain to 19dB. The feedback network from collector to base is composed by the resistance R6 470KΩ and R8 82KΩ to ground (The inductor in parallel with the resistor R7 33KΩ, can be considered as a shortcut).

Applying negative feedback in the transistor amplifier results in an overall reduced voltage gain and transistor input impedance with some improvements like stabilized frequency response and immunity against transistor variations.

The output of the Q2 is connected to the 100K VR1 voltage divider, with the rocketing foot action the voltage gain delivered by the Active Filter Stage is regulated, from 19dB to 1dB.

The last stage is an Emitter Follower used as a low output impedance amplifier with approximately unity gain. The topology is almost the same as in the Input Buffer. 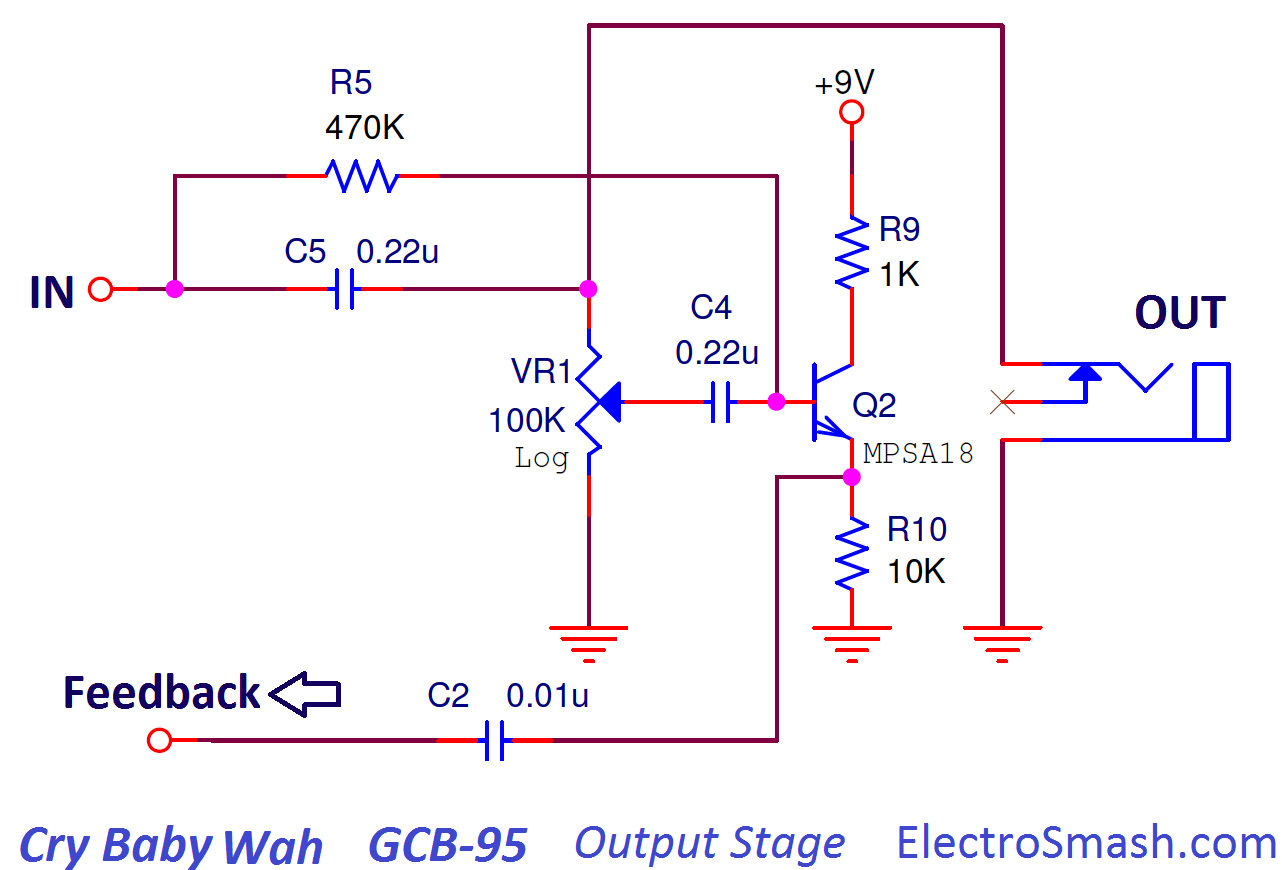 The Active Filter Stage amplifies the feedbacked signal coming from the Q2 emitter through C2 and R2. Because of this amplification of the signal applied across the C2 capacitor, the apparent reactance seen by the input signal looking into the capacitor is different from the real one.

This apparent magnitude of the cap C2 reactance magnitude depends on the gain of the signal of the first stage which is fixed by the position of the rocket pedal potentiometer VR1:

Note: The impedance of an element can be expressed as Z = R + jX

The Dunlop CryBaby GCB-95 can be modified in the same way as the VOX V847.

This mod uses a 3PDT switch to bypass the whole circuit in the typical boutique pedal arrangement. Removing the standard switch and installing the 3PDT, it can be done before or after the Input Buffer stage, most of the people do it before the Input Buffer because is easiest to do and to reverse. 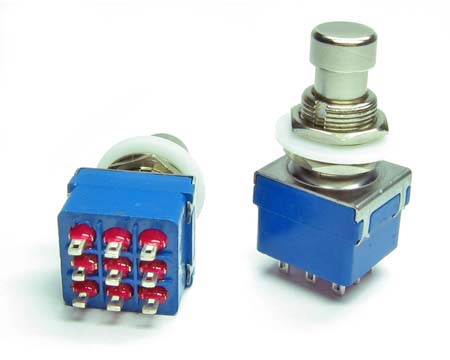 In the StinkFoot website, there is a great article about how to do True Bypass for the GCB-95.

The Quality Factor is a parameter that characterizes how narrow or spread is the selected frequency band.

The 33KΩ resistor R7 adjusts this sharpness of the resonant peak. This modification is also known as “Vocal Mod”, some users replace the 33K for a bigger one like 39KΩ, 68KΩ or even 100KΩ to have more vocal sounding.

In the above graph, the effect of the R7 is shown, reducing its value, the Q factor is reduced, and the filter bell is spread.

The C2 cap determines the center frequency of the wah sweep. Changing C2 the whole wah sweep range moves up or down. In the images below the shift of the sweep range can be appreciated, using 0.1uF, 0.01uF (default) and 0.001uF.

The emitter resistor R4 controls the gain level of the effected signal. Reducing it will result in a slight addition of gain and bass content. In the figure below you can see how smaller R4 values modify the frequency response:

This mod subtle sets the midrange content. Increasing the value of the R2 resistor the heel-down position will sound slightly more strong and emphasized. Typical values for this mod are 2KΩ and 2.7KΩ (default R2 resistor is 1.5KΩ).

In all vintage pedals, there is some component which is often impossible-to-find/expensive which somehow adds the best sound or the legendary original tone. In this case, the Fasel inductor from the first series is considered the holy grail.

There are several options in the market to play with, everything with a DC resistance between 10 to 200Ω (15O typ.), and inductance between 200mH to 1H (500mH typ.) can be used: The Dunlop Yellow/Red Fasel, TDK, Sabbadius Soul Inductor, Coloursound Inductor, Wipple inductor, SOD inductors, miniature audio transformers and coils from industrial filters.

The Bud-Wah is basically a GCB-95 basic schematic with premium grade components and equipped with True Bypass. However, the sound of the Bud-Wah against the standard GCB-95 is sometimes reported as sharper/strident where the notes tend to get lost easier. In order to improve the sound and get a "Hendrix" tone, 2 components need to be changed:

For those who want the standard sweep range with a sound more like the current Bud-Wah, we suspect that changing R7 to 20K and retaining the .01 uF sweep capacitor will likely produce this result based on the results of the above mods.

As an additional info for builders, this is the part equivalence between the GCB-95 and the Bud-Wah:

The Technology of Wah Pedals by Geofex.
Stinkfoot Wah mods.

Our sincere appreciation to Mike S. for helping us with the article.