The Bucket Brigade Device BBD chip was invented by F. Sangster and K. Teer at the Philips Research Labs between 1968-1969. This affordable solid state device provides signal delay and soon found many applications in a wide range of products, especially guitar effects being a midpoint between the bulky old pure analog delay circuits based on magnetic tape and the modern digital systems based in Analog to Digital converters and signal processors. 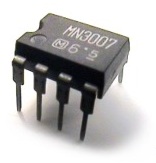 BBDs are given their name because of the similarity in their functionality to a line of people passing buckets of water to fight a fire. The chip was licensed to Matsushita from mid-70s, Roland/Boss was the first customer and they used it in the Roland JC120 Amplifier, the Chorus CE-1 pedal and later on the Chorus CE-2.

They consist of a series of capacitors sections which carry the analog signal. The charge in each cap stage is passed into the subsequent stage using transistors as switches at a rate determined by an external clock.
In this way, the output delayed signal is discrete in time due to the external clock sampling and analog in amplitude because of the capacitor storage element.

With the high level of CLK2, the input signal is gated through Q0 to the capacitor C0. At the next clock transition, C0 is isolated and the last voltage applied to C0 is held. As CLK2 goes down, CLK1 rises allowing the charge on C0 to be gated to the storage capacitor C1. On the next clock transition, gating transistor Q1 is disabled and Q2 is enabled to allow the charge in C1 to pass the next stage C2. The process is repeated through the circuit until the same voltage appears at the output.

The basic BBD internal schematic is made of a series of typically thousands of capacitors and MOS transistor switches. The design suffered some modifications to enhance its performance:

The basic model invented by Sangster at Philips in 1968. It was the first attempt to make a practical implementation of an analog delay structure. This initial design had a poor transfer efficiency being limited to few stages and low-frequency applications.

Two out of phase clk lines are required: one to govern the even-numbered caps and the other to drive the odd-numbered ones. The performance was enhanced being able to use it in audio applications.

Between each of this switch transistors, there is a capacitor (charge-holding element) which is separated by a DC-biased gate transistor, which greatly improves transfer efficiency. Only half of the caps carry information, the other half remain charged

Some designs use a trim-pot to vary the load termination between the two output followers to minimize clock frequency component due to VGS between them. This could be useful if running very low clock frequencies, and tight filter skirts to passband.

Another well-known topology is the Dual Delay Line which is made of two delay sections running in parallel:

For more details about these configurations check the Reticon SAD1024 datasheet.

A buffer amplifier (NMOS source follower) can be used for non-destructive sampling of the capacitors. These measure points or taps permit to have multiple outputs with a different delay, which is very interesting in order to model reverb effects, mixing the different delayed output signals properly.

The most common BBD chips come from Panasonic/Matsushita MN3xxx series, with variants for high/low supply voltage and the number of stages. 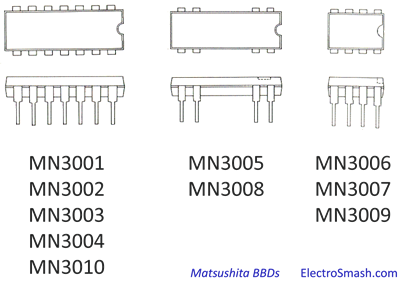 Besides Panasonic/Matsushita, other companies were licensed to make BBD clones like Behringer which bankroll Coolaudio and started producing MN3207/3208/3205 clones for their own production needs. Visual Sound recommissioned production of MN3102/MN3207 in 2009. Shangai Beilling Co LTD manufactures pin compatible parts with Panasonic/Matsushita chips, labeled with BL instead of MN. 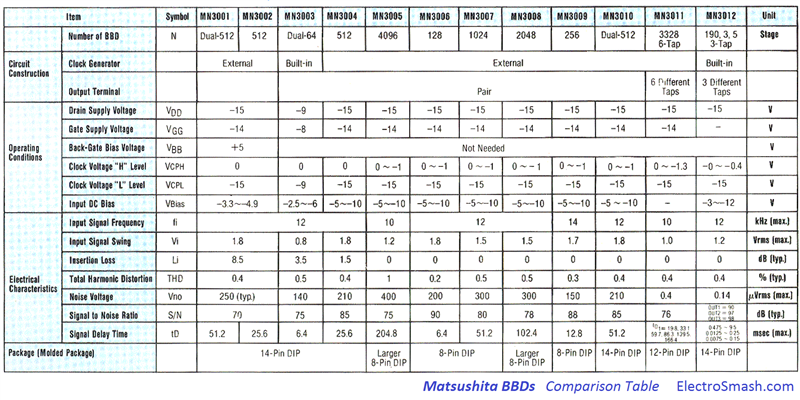 Reticon manufactured the popular BBD chips SAD512, SAD1024 and SAD4096, whose suffix represents the number of BBD stages.
Less common chips include the Reticon R51xx and RD51xx series and the Philips TDA1022.

In order to make a BBD system fully working, a complementary clock signal generator driver is needed. Matsushita/Panasonic MN31xx series have a convenient small footprint package designed to match with their respective BBD and providing:

The usage of these devices is not mandatory, some designers in order to reduce costs, have more flexibility or achieve higher clock rates use simple voltage dividers to get VGG and oscillator parts like CD4046 (used in Zombie Chorus), CD4047 (used in Small Clone, Carbon Copy, and A/DA Flanger) or 4013 (used in Electric Mistress) to generate the double clock signal.

Following the datasheet recommendations, BBDs guaranteed a correct behavior under a certain clock frequency (100~200KHz). It is because the input capacitance of the clock pins causes progressive degradation of clock pulses above the frequency limit: The clock pulses change from square to a trapezoidal/sawtooth waveform. When that happens the switching action is not perfectly synchronized resulting in a signal degradation.

The clock frequency limitation is the reason why the Reticon SAD1024 chip was a largely preferred choice for flangers effects which involve short delay and fast clock: the input capacitance on the clock pins was much lower (110pF) than on the MN3007 (700pF), allowing it to be clocked at much higher frequencies.
When suitably buffered, though, there are reports of it clocking MN3xxx chips up well past 1MHz, which takes the device close the zero-delay zone, being convenient for fine flanger effects.

BBD Sampling Time Limitations: For any BBD, the total delay time can be calculated as:

N: is the number of stages.
fclock: is the circuit clock frequency.

The clock signals applied to the BBD will determine the signal sampling time, this sampling time should respect the Nyquist-Shannon Theorem:

The BBDs are found in delay based effects such as echo, chorus, reverb, vibrato, flanging or delay all of them share the same general circuit architecture:

Part of the input signal is processed through the BBD chain. Depending on the clock circuit the specific effect is created: the Low-Frequency Oscillator LFO is used for flanger/chorus/vibrato effects to automatically modify the delay time. For other effects like a simple delay, it is not needed.

The output of the delay line or part of it can be feedbacked into the input with variable gain, generating trailing echoes.
Before and after the BBD action, there are some stages needed to avoid signal degradation: Dynamic Range compression/expansion, Anti-Aliasing Filter and Reconstruction Filter:

In some cases, the compression and expansion take place outside of the anti-aliasing and reconstruction filters, while in others, the compander is implemented directly at the input and output of the BBD. Some BBD systems that require companding utilize the 570/571 series chips. This integrated circuit consists
of a pair of variable gain amplifiers and signal level averagers.

Finally, the wet or processed signal is mixed with the dry original one, depending on this mix ratio the effect over the original signal will be more or less dramatic.

Drawbacks of Bucket Brigade Devices:
First of all, there is degradation of the capacitors charge as it passes through the bucket brigade, these losses deteriorate the quality of the delayed signal by introducing noise and distortion. The signal is slightly modified, but this is not a drawback necessarily, some players consider that this feature is unique in BBDs and contribute to create a warm or organic tone.

The process of passing the charge from bucket to bucket creates clocking noise in the signal. The output signal, therefore, looks like the audio signal, but there are “spikes” in the wave that corresponds to the clock frequency. The solution to this problem is to remove the spikes with a low pass filter, typically 30 or 36 dB per octave with a –3 dB point of around 3 kHz.

The low pass filters used for Anti-Aliasing and Reconstruction must be strict to avoid signal distortion and keep the clock signal out of the audio path. Common configurations implement high order (2nd, 3rd, 4th) active filters using op-amps or transistors in Sallen-key configuration because of their simplicity.

In this, so called, standard strategy the cut-off frequency of the filters before and after the BBD is fixed according to the effect delay time:

The MN3007 core is based on the Bucket Brigade Delay circuit with an isolated triode and a differential output. It was included in popular designs like the DM-1 and CE-2 by Boss, Small Clone and Memory Man by Electro-Harmonix, AD-999 by Maxon or Analog Delay by MXR:

There is some controversy among the MN3007 and MN3207 BBDs: some designers prefer to use the MN3007 because it has more headroom (higher levels/dynamic range without signal clipping) and therefore less distortion.

MN3207 is based in NMOS technology while MN3007 is PMOS (that is why it needs negative supply). Both are 1024-stage BBDs sharing the same internal circuit.

Summarizing, using MN3007 will provide light advantages in terms of THD, and more dynamic headroom. In a guitar pedal, the chip will work at 9V, below the optimum supply range. So far seems that the performance in this conditions is good and preferred over the MN3207.

However, in BBD circuit design there are many other other factors that can improve the performance more than the chip itself: