Don Morris is an electronic engineer who joined MXR's Engineering Team back in the spring of 1979. This is a short interview about how he worked on the Phase 90 redesign, the insides of the company at that time and his own story.

MXR Innovations was a guitar effects company founded in 1972 in Rochester, New York by Keith Barr and Terry Sherwood. Keith and Terry met as high school students and together started Audio Services, an audio repair business. This experience led them to form MXR and begin producing their first original effect pedal design in 1974, the M-101 Phase 90 phaser.

-The first "Script period" was actually made in the basement shop of the founders of MXR and the logos were silk screened by hand. These very first pedals can be identified by a slightly larger font “MXR" on the case.

-The "Block Logo" period began around 1977 and lasted until 1981. In the beginning, they did not include LEDs and A/C adapter jacks but over time they eventually got them.

Don Morris joined MXR's Engineering Team back in April 1979, at the beginning of the Block Logo era. His first task was to update the Phase 90. He was given the following targets:

Over the next 6 months, Don examined dozens of failed units and searched for dual op-amps with low power consumption, and for alternate suppliers of the FETs.
After bread-boarding several versions, he laid out the new PCB and submitted the result for approval, which it received. Here's what he did:

Selected the TL062, the low-power version of the TL0xx line. It satisfied the power-reduction requirement and did not alter the sound in any significant way. And with a dual op-amp, he gained valuable real estate on the board!

Now that the units accommodate AC adapters, most of any decent dual 8-pin op-amp can be used, and an on/off LED--a battery-killer in the past--is essential now. But that was the thinking and experience at that time.

By October of '79 MXR had approved the final documentation on the fourth and most extensive revision of the Phase 90. 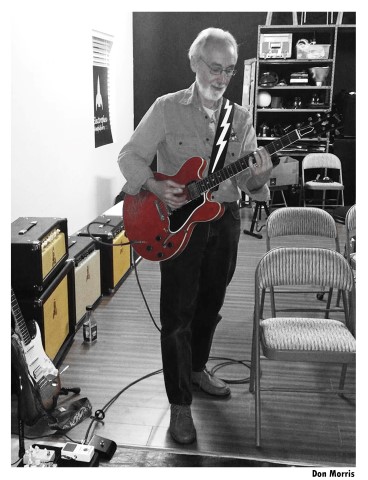 In the lines below, you can read a short conversation we had with Don Morris, he was open-handed to share with us some of his experiences and insides of MXR at that time:

Don, what are your feelings about MXR back in the 70s, how was the atmosphere at that time when the company was booming?
It was a fun place to work as an engineer. Not "laid back" per se, but not high pressure either. They were the Kings of the Hill, and they felt good about it; deservedly so. The engineering team was very open and helpful--I learned a lot from them. We laughed a lot. Most of us played guitar, so we often had cool toys to play with that someone brought in for show and tell.

The manufacturing line was more high-pressured--always feeling the pressure to fill back orders. I was surprised to learn that smoking weed on the line was accepted right up until the time I arrived. I guess it helped workers (and their bosses) deal with the stress. But one of the first office memos I remember seeing announced an end to the policy permitting weed smoking on the line. My usual bad timing I figured!

Tell us a little about the way you started making stompboxes. Where does this interest come from? Do/Did you play guitar?
Yes, I play. I started when I was 9. I always wanted to get new sounds from my gear, and I fearlessly started out experimenting before I reached high school. I had a Dual Showman that I couldn't get into overdrive without playing at deafening levels, so I put a power diode in between the amp and the speaker cab. It sounded perfectly dreadful, and the amp and diode got real hot. End of lesson one.

I built my first stompbox while in college, adapting a slow-attack compressor circuit to simulate the sound of playing a tape recording in reverse. It worked, sort of, if I radically adapted my technique to it.

After college, I worked with New Jersey luthier Sam Koontz, who was also interested in creating new sounds. I built an octave divider circuit that he hooked up to a "split" pickup, with the 5th and 6th strings (A and low E) on a separate winding going into the divider. It was pretty cool.

Which is your favorite guitar pedal from the MXR product line?
That's hard since they made quite a few good ones. I'm partial to the Phase 90, but the AC-powered Analog Delay is another favorite.

Your readers are probably aware of MXR's Commande Series pedals, the plastic-encased response to requests to update the pedal line. They never quite caught on, which is a shame. In reality, it gave the engineers a chance for "do-overs", and most of them are quite good. Plus, they go for peanuts on the used market these days.

Which is your favorite guitar pedal from another manufacturer?
Another hard one, but I have to go with the Boss CE-1 Chorus Ensemble. I love the amount of control it offers, and its revolutionary sound set the bar for the multitude of chorus pedals to follow.

For distortion, I loved my set-up while in high school. I bought a Fuzz King because the Maestro Fuzz-Tone was impossible to get once the Stones' "Satisfaction" hit. It was a terrible fuzz until I replaced the AA battery with a 9-volt. Then my buddy brought over his brand new Vox Tone Bender. It was cool too, but not exceptional to our naive ears. But when I put the Fuzz King in front of the Vox--shazzam!! Fuzzilla was born! It was my first experience with "infinite" fuzz sustain and it was a lot of fun.

But one cool old overdrive box comes to mind: the Washburn AD-3 Stack-In-A-Box. One came through the shop at Hoshino (Ibanez), where I worked after my time at MXR. A simple 3-knob box, but it sounded amazing at the time (mid-80's).

What do/did you do when you were not building pedals/amps?
I worked full time up until my retirement in 2009. After 4 years at MXR and another 4 at Hoshino, I spent 23 years at Yamaha Corporation, doing marketing and customer support stuff. I started building Electroplex Amps during my time at Yamaha, but that's another story.

Having raised 2 kids, my wife and I are now happy grandparents with 2 grandkids, who often say "Grandpa plays guitar too loud!" I try to be careful when they're around!

I'm very excited about the explosion of incredible pedals in recent years; from boutique builders and the "big boys" alike! It tells me that there still is a universe of new sounds waiting to be discovered! So let's get going!!

Thank you very much Don for sharing with us this piece of guitar pedals history. We really appreciate the job done by engineers like you for the music's shake.

All the original text rights belong to Don Morris. ElectroSmash does not keep any rights.
All the logos, brands and images are property of their respective owners.